How did Apple forget to focus its product line-up?!

When Steve Jobs returned to Apple he famously trimmed the line-up to only a few products, thereby focussing the company and presenting a coherent set of options to consumers. As Apple has grown over the last couple of years, its product line-up has become increasingly confused and bloated. To me this became apparent when Apple continued selling its iPad 2 as well as the iPhone 4S for a staggering 3 years. But it’s not just tablets where this can be seen. The incoherent product offering has slowly crept up throughout the entirety of its line-up to a comedic proportion with regards to the naming schemes. Three aspects are particularly wrong: 1. the age ranges from the cutting edge to embarrassingly outdated products, 2. the screen size and quality is confusing and 3. the naming schemes are meaningless and incoherent.

A quick look at screenshots from the Apple store are the easiest way to visualise the current offerings. 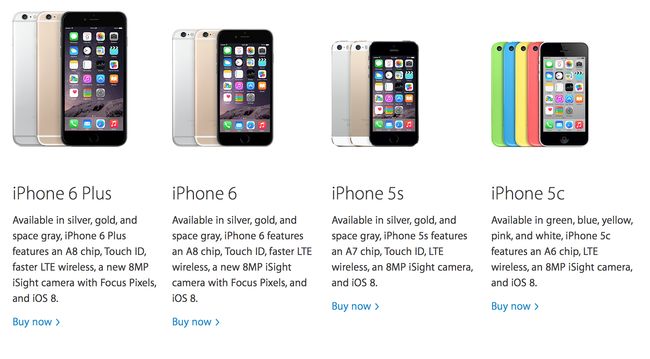 The iPhone is the simplest of Apple’s line-up with only four models.

Naming: The iPhone 6 uses plus / non-plus to describe the screen size. The iPhone 5 uses a vaguely associated character to distinguish the phones (supposedly S stands for speed, while the C might refer to colour). The iPhone version number (5 or 6) is meaningless to the end-user.

Screen quality: All but the original iPad mini are retina screens.

Naming: The iPad has by far the most obscure naming scheme. The 10-inch tablet is referred to as Air and the 7.9-inch tablet is the mini tablet.
Air is a weird reference to describe the larger tablet, though at the time of course it was relative to the predecessor. So far so good.
On top of that, we have version numbers. Far too many numbers. To end-users they are entirely meaningless other than describing their relative age. Furthermore, Air and mini numbers are incompatible.
To conclude, age, screen quality and naming are all over the place. 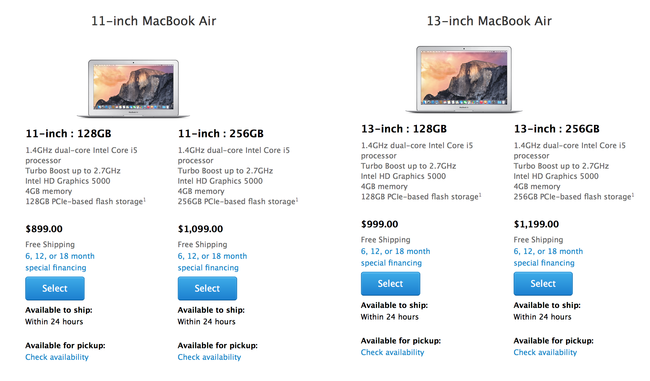 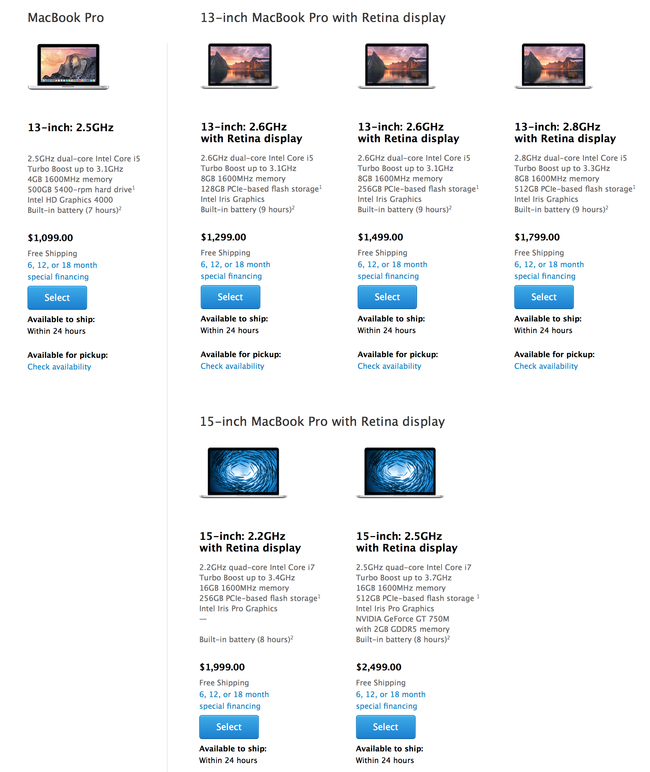 The Macbook line-up is by far the worst offender of them all, with Apple offering 10 different MacBooks.

Age: Apple has done a relatively good job in updating the Macbooks. All models are have relatively recent Intel processors that are updated on a regular basis. There is only one offender: the 13in Macbook Pro (non-retina) is an old model that has just been kept as a low-cost alternative that also still has a DVD drive.

Naming: The Macbook Air has 11-inch as well as 13-inch options, while the Macbook Pro offers 13-inch and 15-inch retina screens, as well as a 13-inch non-retina Macbook Pro. The names are very descriptive, referring to screen size and quality, though the sheer number of options makes this whole exercise a little silly.

Why has this happened? #

The large number of options within the Macbook line-up is likely due to technical reasons. As of now, none of Intel’s integrated GPUs available for the Macbook Air form factor are capable of driving a retina display. This will probably change once Intel’s Broadwell chips with Iris graphics become available.

The current iPhone and iPad product line-up incoherency originates in Apple retaining older models as their cheaper price offering. Apple is essentially selling outdated hardware at a cheaper price in order to not lose the more price conscious market segment.
There are of course a multitude of reasons for Apple retaining its old models, all relating to it being an easy option for which nothing has to change. Existing stock does not suddenly become outdated; costs for manufacturing tooling have been largely written off; the product has a proven track record. Last but not least, the old product is readily available while new Apple products have severe shortages during their first couple of months (this is particularly true for the iPhone). Nonetheless, this is a poor excuse for retaining products for 3 years in the line-up and could and should be managed differently.

This mess needs to be cleaned up as much as possible given the seemingly limited engineering capabilities at Apple (which given it’s size it shouldn’t have).

Age: Selling outdated hardware to your customers is plain bad practise and to a degree dishonest to the customer. All hardware should either be regularly updated or discontinued. In this day and age, a one year update cycle would be appropriate, give and take. It is fine if the form factor remains the same as long as the internals (CPU / GPU / wireless baseband) are up-to-date. The regular update regime of the Macbook is exemplary of how iPhone and iPad releases should also be staggered across the year. In order to stay price competitive cheaper designs should be introduced, such as the plastic iPhone 5C.

Screen quality: As a premium hardware manufacturer, Apple should only be selling retina devices. The one exception being the Macbook Air line-up that won’t be able to support retina displays until Intel manages to deliver integrated GPUs that are fast enough, which should hopefully be rather sooner than later.

Naming: Apple needs to start taking its naming seriously and design its product naming scheme in a more focussed and coherent manner. Names have to be descriptive and meaningful. Sequential product numbers are relatively meaningless to the standard end-user, though internally to Apple this of course makes sense. Screen size seems to be the biggest distinguisher throughout the product range. If Apple insists on retaining older products, the only sensible numbering scheme for users is the year the product was originally released, as found throughout numerous industries. The iPad mini 1 / 2 / 3 would become the iPad mini 2012 / 2013 / 2014, not exactly ideal either. A small nitpick: having an iPhone Plus (capital P) as well as an iPad mini (lower case M) makes no sense typographically.

iPhone: Accepting that different screen sizes suit different personal needs has lead Apple to easily segment and name the market. Apple should have three models: the iPhone mini (4-inch), the iPhone (4.7-inch) and the iPhone plus (5.5-inch), each with their own price point. Old models should either be disregarded or at least have their internals (CPU / GPU / wireless baseband) chips updated in order to sell relatively up-to-date hardware. For instance, the iPhone mini / 5S can be updated relatively easily with the new A8 SoC and latest baseband chip, while the external form factor can remain the same. To address the shortages during the introductory phase, the updates should happen in a staggered fashion throughout the year, as happens for the Macbook. The newest models should be introduced as usual, with older models having their internals updated as soon as capacities are freed up. That way all products can be updated roughly on a yearly basis while avoiding shortages.

iPad: There are two screen sizes and consequently there should be two high level products, namely the iPad and the iPad mini (rumours are that a 13-inch iPad plus is in the making). The whole line-up should have current CPU / GPU / wireless baseband chips, while the touch ID and storage size act as upgrade options. This is already the case when comparing the iPad mini 2 and iPad mini 3 that only differ in terms of touch ID. All outdated hardware should be dropped, especially the last remaining non-retina iPad mini that Apple should be ashamed to still be selling to unknowing customers.

MacBooks: This is by far the most complex product. The Pro and Air MacBooks have a physically different form factor, that require different energy and heat efficiency requirements, that in turn restrict the applicable CPU/GPU. The Macbook Pro and Air are likely to converge at some point due to Moore’s law, but until then the Air and Pro separation makes sense. What does not make sense is selling Airs and Pros as entirely different product lines. From a customer perspective they are all simply laptops. The Macbook landing page should offer MacBooks for 11-inch Air, 13-inch Air, 13-inch Pro/Retina, 15-inch Pro/Retina with their different price points. The outdated 13-inch Macbook Pro (non-retina) should be immediately discontinued.

This entire mess is somewhat surprising given how Apple claims to think things through and focus. It seems as if they’ve focussed a bit too much on the products themselves, but forgot to keep track of the bigger picture.

Ironically Apple’s competitors in the phone / tablet space have already adopted to coherent naming and development schemes, with HTC aggregating its phone efforts in the aptly named One range or Google using the screen size to coherently name their Nexus range of phones and tablets. In contrast to this, the Samsung galaxy range is even less coherent than Apple’s. More broadly speaking, coherent product lineups and naming schemes are far less common than they ought to be throughout major industries.

The good news is that Apple could adapt to a clean and coherent product line-up with relatively little effort, albeit losing a little of its competitive price edge by dropping its outdated products. Being price competitive should not mean that you sell dishonest outdated hardware. Luckily the breakneck pace of both the phone and tablet market development is starting to slow a little, as is evident with regards to slower CPU speed increases per generation (this year the A8 CPU speed “only” increased by 25% vs 100% for the previous years). A slower hardware pace should allow Apple to update it’s line-up more regularly and coherently, though it will likely ruffle some feathers in Cupertino to do this thoroughly in a timely manner. Let’s see what the future brings…

After Apple’s presentation on March 21st 2016 it seems as if they have listened to my previous post on their line-up, at least with regards to the internals. All iPhones and all apart from one iPad now have the latest or previous... Continue →